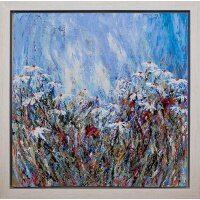 Carl scanes has built a reputation as one of the country’s leading impressionist artists. his beautiful paintings of wild flowers in their natural habitat has won him both popular and critical acclaim in the uk and the united states. Born in london in 1964, carl received his early artistic training from his father, himself an abstract artist, and after graduating from the holborn central school of art he became a professional painter at the extraordinarily young age of 18.... more

Carl’s first solo exhibition took place in copenhagen in 1984; it was successful enough to confirm that he had chosen the right path and his career flourished. then seven years later he made a trip which was to have a huge impact on all his future work, visiting monet’s famous home at giverney. he began to take a more impressionistic approach and created a series of editions celebrating some beautiful views of the artist’s house and gardens. His interest in flowers continued and he painted extensively in his wife jane’s garden in surrey. he also developed a passion for wild flowers and woodlands, and over time his style evolved into what it is today.

Carl lives with his wife and three children in surrey and draws his inspiration from the local landscape. his work is highly sought-after on both side of the atlantic. his international array of collectors includes billy bragg and the earl and countess of bradford, as well as the late jack palance and benazir bhutto.