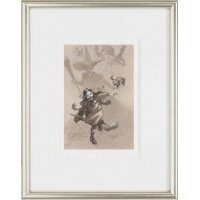 i was born in 1965 in sheffield and have enjoyed drawing for as long as i can remember. art was my favourite subject at school, but once i left I took it no further. in the late 80’s i managed to get a job as a cartoonist, working on pre-school comics. i drew comic strips of a variety of characters including the shoe people, the wombles, huxley pig and bangers and mash.... more

drawing every day improved my skills and after a few years i moved on to work at a computer games company as an animator and games designer. during this period i worked on a wide portfolio of games, including zorro, the hulk and the hurricanes, as well as the game concept and characters for johnny bazookatone.

years passed and sculpting work was getting harder to come by. but something else was around the corner: in late 2007 i noticed a contest in which washington green hoped to find alexander millar an apprentice. i had always wanted to try my hand at painting, but had never got around to it; here was my opportunity. i quickly painted and entered a picture, and, to my surprise, i finished in the last three! that was it, the life of an artist beckoned.

i began to paint seriously from that point and local galleries started to sell my work. now I can’t imagine doing anything else.