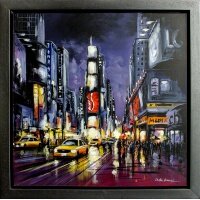 csilla was born in 1961 in budapest, hungary. she graduated from the university of budapest in 1984 with a masters degree in art and followed this up with a year as a scholarship student in the former ussr. after spending much of her twenties travelling around europe she finally settled in the uk.... more

fascinated by these exciting foreign cultures, csilla was inspired to paint what she saw. her favourite place and the one which first galvanised her imagination was paris, and she was entranced by its intimate cafes, grand boulevards and bohemian culture. she was a member and a co-secretary of the parisian Independent salon's hungarian group since 1996, where she helped several talented young artists to establish their reputation on the hungarian art scene.

the cityscapes of csilla orban occupy a unique position on the current art market. although they depict specific and often recognisable locations, their particular brilliance lies in the creation of atmosphere rather than the accuracy of detail. by merging colours and blurring the reflected light in the rain-slicked streets, csilla conveys the fast-moving essence of her chosen subject in her own distinctive way.