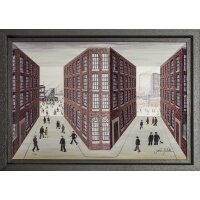 aged 12, john was given a set of oil paints and an easel for christmas (the easel he still uses today 40 years later!). painting in oil opened up a whole new world of colour and texture to him, and he has since developed his style into illusionary 3d wall sculptures.... more

after attending a series of painting classes, john wilson was introduced to figure painting and pop art. in the mid 1990's john began to seriously concentrate on his art and started exhibiting in the local galleries. john's work has followed a steady path of progression with an innovative suite of illusionary 3d wall sculptures added to his ever expanding portfolio.

john's unmistakable style was first inspired by the way children tend to perceive and interpret things within their everyday lives. picasso once said that when he was a child he could paint like an adult, and he spent all his adult life trying to paint like a child. this gave him the idea of mixing children's art, with no inhibitions, together with the carefully planned paintings of the adult artist.