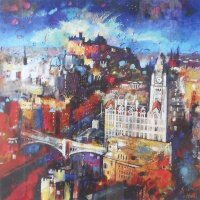 Born in dorset in 1952, rob received his art education at banbury and loughborough, graduating in 1977. since turning professional in 1981, he has exhibited throughout the uk. his work is varied and not confined to any one style. he feels at home painting busy, populated townscapes as well as richly coloured abstracts.... more

Notable achievements include work for the italian centre in glasgow, for which he received a civic trust award; artist in residence at the tweed festival and inclusion in the simpsons of piccadilly cultural exposition of the scottish borders.

His love for his adopted home of scotland can be seen in his choice of subject matter in the paintings he creates from his studio in selkirk.