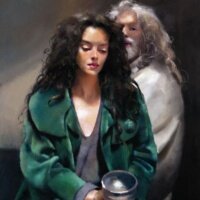 Robert Lenkiewicz was a natural outsider and radical, consciously at odds with contemporary thinking on ethical and aesthetic issues. nevertheless, a huge cross section of society was attracted by his charismatic personality, his generosity and his great gift as an artist.... more

Lenkiewicz was born in london in 1941, the son of jewish refugees. he spent his childhood in the hotel in cricklewood run by his parents, whose elderly residents included a number of survivors of the concentration camps. his social conscience was awakened early by these refugees, and many of them feature in his first paintings.

After attending st martin's college of art and design and the royal academy, lenkiewicz pursued an independent course as a painter, largely uninfluenced by contemporary art fashions. he welcomed a stream of colourful characters in his life who inspired his large painting projects on such social issues as addiction, homelessness and suicide.

His ironic study of relationships in the painter with women broke with his usual practice of showing work in his own studios, he exhibited many of the paintings from this project at the birmingham International convention centre in 1994. more than 35,000 people visited the exhibition in a single week.

For lenkiewicz, the act of painting was a profoundly moving experience. his main aim was to capture the transient and emotional qualities of his subject and he left a unique and hauntng legacy. 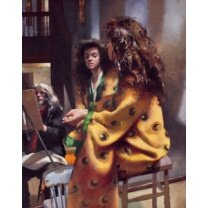 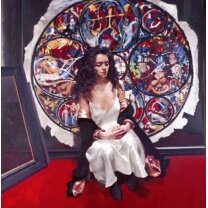 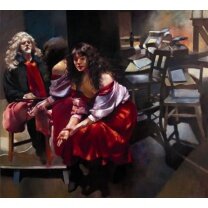 Painter With Karen In Studio
by Robert Lenkiewicz