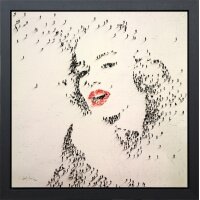 Craig's extraordinary artistic vision is created with a unique combination of technical skill, creativity and wit. His 'famous faces in a crowd' show icons of the stage and screen recreated in dozens, sometimes hundreds of small and intricately painted exquisite figures. These figures become the fabric with which he weaves highly complex compositions.... more

Craig was originally inspired by some photographs he had been taking from the sixth-floor balcony of an apartment in Alabama, observing the shifting shapes in the crowds below. In one shot, a group of people appeared to have formed an eye on the screen, and this started his creative wheels turning.

Each distinctive piece is created in black and white with a touch of red on some of the more glamorous faces. In their own way, they reflect Craig's highly recognisable take on life, where it is the small details that work together to create the big picture. A characteristic blend of disparate influences and media is visually apparent in his breathtaking work, and his unique approach demonstrates both technical sophistication and elaborate imagination.

Now based in Atlanta, Craig was born in 1971 in California, but his artistic talent began to emerge when his family moved to New Orleans in his youth. It was here that his capacity for detailed visual interpretation took root. In this city by the sea, rich in its culture and outlets for creative expression, Craig began exploring his own ingenious impulses. His earliest experimentation took the form of street portraiture, an endeavour that helped him perfect his flair for replicating the human figure.

Craig studied art at Mobile, Alabama, winning awards for academic excellence. The university's most prestigious exhibition, 'Art with a Southern Drawl', featured 42 of Craig's pieces, chosen from a field of more than 1,600 submissions. He has exhibited his work across the United States to great acclaim and is now making a significant impact on the UK market.