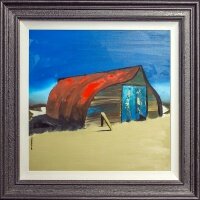 Garry Brander was born in 1983 and recently graduated with a BA (Hons) from (GSA) the Glasgow School of Art in 2011. Brander is a very likeable ‘free spirit’ who paints expressive imaginative landscapes with a particular focus on sheds and huts set against simple, non-cluttered backgrounds. He adds, in a typical humorous fashion - ‘My buildings are like me – they are falling apart.’... more

He has always had a fascination with building-type materials and making things – as a boy he favoured plasticine, building blocks, Lego and Meccano. He also said that his big brother hogged the Nintendo, so he was forced to draw to amuse himself. Uncertain of what to do as a career as he left school, he then started instinctively to build garages, sheds and house extensions, however he became unsettled and decided that his real interest lay in art construction rather than physical building construction. He undertook an art foundation and portfolio course including graphic design at Anniesland College at the age of 21, before gaining entry to GSA. Brander feels very strongly that he had to fight the teaching system at GSA and he felt shunned and excluded as a student. He maintains that the institution rejected his character and his desire to be a commercially successful artist. Brander says that he has ‘wee worlds’ and ‘wee construction stories’ in his imagination and his head and he enjoys releasing these buildings onto canvas for you to enjoy.