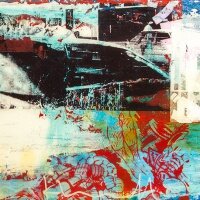 The Amsterdam artist George Heidweiller was born on May 15, 1963 in Beverwijk, the Netherlands. He studied from 1980 to 1984 studied at the Royal Academy of Art in The Hague.... more

Since his classical training at the Royal Academy in The Hague George Heidweiller has been investigating the possibility to combine a variety of techniques and graphic elements in collages. But it is not only different techniques that the artist mixes in his works. George Heidweiller also mixes visual fragments of various origins. Because his canvases display mostly western and oriental icons display next to each other, you get the feeling that you are on a world tour. Asian street culture, South American colors, western violence, consumption, erasing the dividing line between art and life..

The mounting technique George Heidweiller uses in his current work seamlessly blends with the contemporary art image, which mixes old, new and any other different elements to be integrated within a concept. The materials George Heidweiller uses vary greatly. They often appear manufactured by himself directly applying silkscreens on canvas where the artist merges the various visual elements into a new whole. The image is often reinforced with collages made with mixed media on carriers such as paper, cardboard, canvas or wood. The work of George Heidweiller surprises by its clear imagery and contrast layering, both in terms of technique as well as its form. The dynamics splash of his cloths! George Heidweiller now has an impressive track record with numerous exhibitions and missions around the world.The work of the artist is part of numerous private, government and corporate collections.