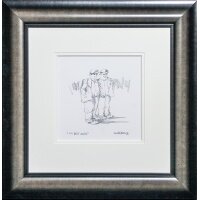 george somervilles's nostalgic subject matter grew out of a desire to paint the memories of his glaswegian childhood in the industrial fifties, with his originals and limited edition print collection bringing him into the art world.... more

he wanted to recreate the places and people where he had grown up; the foundries, factories and steel works which have now disappeared from the urban landscape. as his work progressed however, he found that the characters were taking over, and that the industrial background became less important.

despite his lack of official training, george continued to paint for pleasure into adulthood, and began to display his work in a variety of scottish galleries. he describes his style as spontaneous. once he has a subject in mind he tends to paint in a frenzy of activity in a bold linear style. he cites a range of influences on this distinctive approach, not the least of which is the classic comics and graphic novels which were his favoured reading material as a child.

having lived and worked in glasgow for most of his life, george now has a studio in a small fishing village on the east coast of scotland.