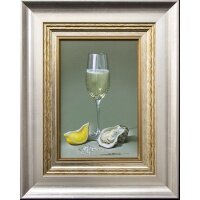 At the age of 16, he was enrolled in the noted academy of mila gomez where he studied and perfected his technique under that classic Spanish master. upon graduation in 1976, he became a professional artist, eventually achieving international recognition, first at an international exhibition in granada, spain in 1982; then later at other international exhibitions, notably in chateauroux, france in 1996 that led to the introduction of his work to the United States in 1997.

Since then, his work has been regularly shown in New York, Atlanta, Sausalito and Washington, DC. His art has been acquired by major collectors worldwide from a Saudi Prince to corporate executives in Saudi Arabia, Japan, Jakata, Bahrain, Holland the United States.