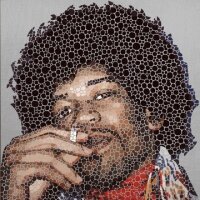 Paul’s art has received global acclaim from critics and collectors in the fashion and music industries, being hailed as some of the most style conscious imagery to define the shifting trends of popular culture.... more

Paul’s iconic images are summoned through individually painted dots in high gloss enamel paint on sheet aluminum; this meticulous process creates a flawless reflective quality as if they were literally in a glossy magazine. Paul’s many high profile fashion assignments have included a range of portraits of supermodels kate moss and agyness deyn. In 2008, paul was personally approached by brandon flowers of us rock band the killers, and asked to create the cover artwork for their third album ‘day & age’ which is now multi-platinum. this was named ‘best album cover of the year.’ by rolling stone magazine.