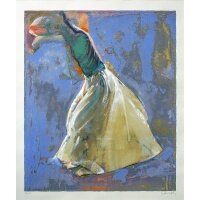 Following graduation from famous artists robert heindel's career flourished. at first in the world of illustration where, during the 1970’s, he was recognised as one of americas finest and achieved work on the covers of ‘time’ magazine and won a place in the permanent collection of the smithsonian Institute in washington dc.... more

Dance and dancers are heindel’s inspiration - those he dwells upon in his individual paintings are exquisitely captured but of greater significance is the mood and atmosphere he achieves. he comments "dancers have perfect bodies capable of attaining extraordinary physical heights, i find them fascinating. stage performance is secondary for me when compared to the rigours and genuine emotion i see in rehearsal"

Lord andrew lloyd webber commissioned heindel to paint impressions from his musicals ‘cats’ and ‘phantom of the opera’ during the mid 1980’s. these impressions were then seen world-wide in the theatre productions.

Diana, princess of wales was an admirer and collector of heindel work, attending some of his exhibitions. other royal guests to his exhibitions over the years have included princess margaret, princess caroline of monaco and prince takamado of japan.