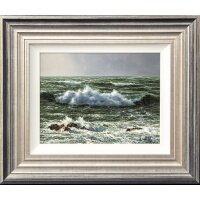 alfredo navarro montllor was born in alcoy (alicante) in 1965. he has always lived an artistic life, as his father was also an artist who supported him when navarro was very young. at the age of five he began at the fine arts school painting murals, carrying out this activity until he was eight. he studied egb (similar to middle school) and before going to high school, and when he was 13, he began to paint with oil. he alternated between painting and his schooling until he finished high school, when he was assigned to la coruña (galicia, on the atlantic spanish coast) in order to serve in the
military (1985-86) it was during the year that he spent in the northern region of spain when navarro montllor started to discover his fascination and admiration for the immensity of the ocean, seeing that the conditions that this ocean offered was very different from the ones given to him in the mediterranean sea.... more

navarro established his own studio (1996), exclusively dedicating himself to perfect his technique, incessantly looking for the realism in his paintings. he tries to show the spectator a window that shows the beauty of the sea, as he perceives it; in addition he confesses that his works reflect to a great extent his frame of mind.

A Tree Full Of Love

A Message For You (Sculpture)