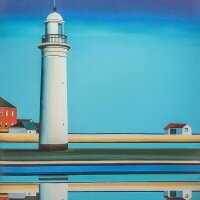 Barbara James was born and grew up in hamble, where her love of the sea began. After graduating with a ba (hons) in music, drama and dance she lived and worked in london until approximately 12 years ago when she moved back to hampshire. Barbara’s chosen medium is oil, she loves its rich, luscious quality and the fact that artists have been using it for centuries.
there is an elegant simplicity of style to barbara’s work.... more

"i've always been drawn to certain visual scenes where mood, light, colour and subject come together to create a unique yet fleetingly familiar moment in time. It could be a few frames from a film, a photograph, a painting or real life - whatever form it takes, the scene has the power to arouse an extraordinarily powerful feeling in me. it's as if one is returning somewhere, to something, always known about but forgotten or never quite seen before in this way, until now". 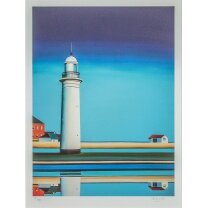 On A Clear Day
by Barbara James