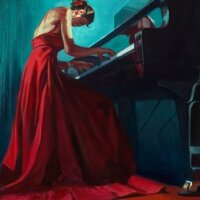 gabe leonard's paintings draw us into a world rich with cinematic atmosphere and narrative intrigue. attracted to the rugged and romantic elements of film noir, he merges technically brilliant figurative painting with a finely crafted ambience, creating a freeze frame full of narrative possibilities. he captures the richness of the mood by combining the free brushwork of an expressive artist with the lighting and framing of a seasoned hollywood director.... more

gabe spent his formative years in the mountain state of wyoming, sketching wildlife and selling the pictures to friends. after graduating from columbus college, ohio with a ba in fine art he moved to los angeles where he began to hone his skills on the ultra-competitive boardwalk of venice beach.

his style is deeply rooted in european artistic tradition, and he is particularly inspired and influenced by rembrandt, mucha, klimt and schiele. yet despite his respect for these establishment figures, he is strongly opposed to academic restrictions and the trademark runs and drips in his work are a deliberate statement to this effect.

his reputation and popularity grew fast and gabe held a series of sell-out shows, aided by the acquisition of his work by man high profile collectors. he has become one of the most sought-after contemporary artists in the world, and is collected in the united states, europe, asia and australia.

taking plenty of time to study the view, the person or the composition that i am about to paint, i can decide the areas that require toning down and the areas that need to be made more vivid, if any, in order to emphasise the character."

An Educated Guess
by Gabe Leonard 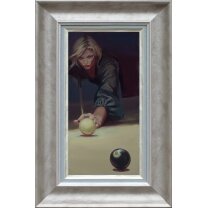 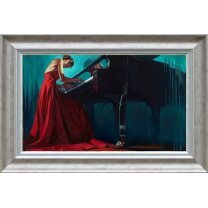 It Takes More Than Talent
by Gabe Leonard 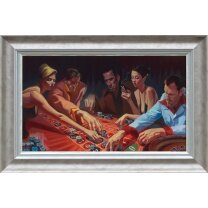 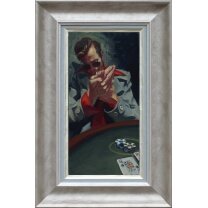 The Professional
by Gabe Leonard