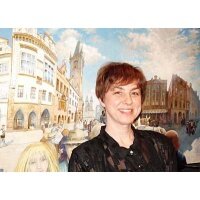 Veronika Benoni enjoyed painting as a child. Memories from her childhood connected with the painting and conversations with her Grandfather remain the strongest influence on her life. She studied at the College of arts in Leningrad and graduated from the college but continued her studies attending the classes in the USSR Academy of Arts.... more

During one of her summer vacations she met Ulian Benoni. Their interests coincided and they spent some time as silver-smiths, where jewellery pieces designed by Veronika and Ulian were bestsellers in Moscow and Leningrad jewellery stores. Later on they settled in Prague and Veronika painted and sold pictures strongly influenced by old Prague itself with its fascinating streets and architecture.

In 1998 Benoni established their school of graphics and painting. In the year 2001 they opened in Mala Strana, Prague central area. These days the Benoni School would refer to itself as to a concept of new artistic techniques of rendering the polydimensional reality on a flat picture surface. The elliptical perspective method is meant to create for the viewer an illusion of being drawn inside the composition centre. Alongside with these activities the school apprentices directed by the Benoni masters continue to develop the traditional trends of modern painting. 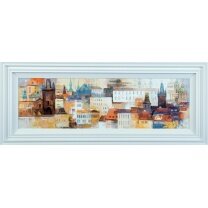 The Prague
by Veronika Benoni